My favorite of all cars!  I will likely draw a few more of these over time from different viewpoints and in other colors.  The first one I saw in 1966 was at a Ford dealership’s showroom, south of Fresno, California on Hwy.41 down about the city of Caruthers and was named Webster Ford.  They were the only Central California Shelby Dealership at the time.  They had one much like this one in the same color.  The only thing they had for me to take away from the showroom was a color postcard, which I still have to this day.  Cost then of a 427 Shelby Cobra: $6,000.  I have been in love with them ever since that afternoon while delivering for my Dad’s business while going to college.  The drawing above is a mixed-media, 36″x24″ on Bristol Board and is framed and matted.

The picture below is the main gallery of the Fresno Arts Council’s space downtown Fresno on Van Ness Avenue, where I had my very first (ever!) art showing of my work for one month during July of 2018.  I showed 19-pieces altogether and was quite proud of this accomplishment.  I will have another show on the first floor of the Fresno City Hall during the month of January 2019. 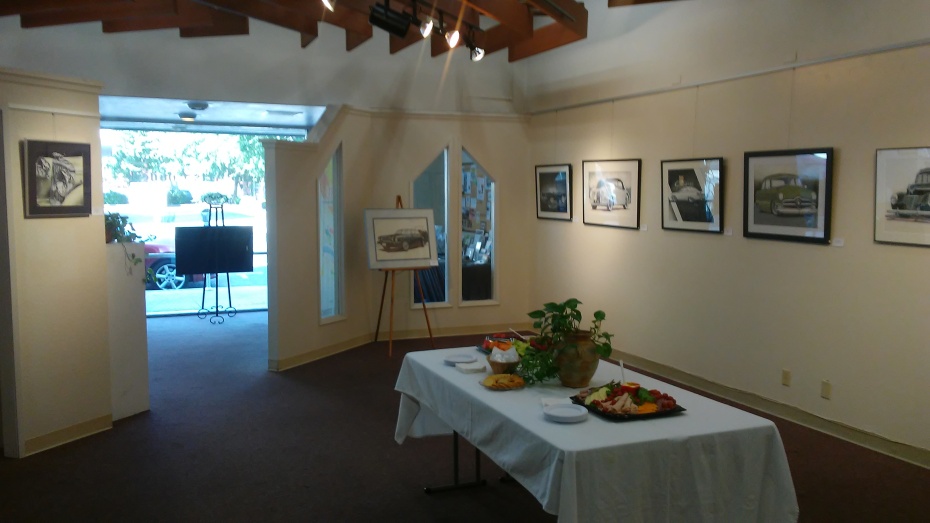 NOTE: All “Professionally” noted images were digitally taken by Tim Fleming – Professional Photographer of Clovis, California. I highly recommend his services.  Besides a large 2×2″ High-Resolution camera, he also corrects color and other issues in the latest Photoshop and has a large format Ink Color Printer to produce the best Giclee copies of various media.

Almost all of my originals are for sale or various-sized color prints can be made.  All can be shipped, with or without frames.  I do not do framing but can get a quote of the frame desired and add it to the cost of the art along with shipping cost.  I can also do custom commissions of any automobile of your car or other you have chosen.  I can quote you a price after discussing the details of what you have in mind.

A 1956 Ford Pickup is one of my all time favorite trucks.  My drawing is one way I would like to see this pickup if I were to restore one.  A mild custom “restomod”.  This cell image is of a 28″x22″ frame.  The emblem is drawn from the same year used.

This is a drawing I did way back in  1989.  It is a 1981 Jaguar XJ6 I owned and drove for many years.  The drawing is done entirely of felt-tip pens and markers.  The markers consisted of about 10 different shades of gray and black.  It will never be for sale.

This is a ’32 Ford and my version of what I would want one to look like if I were to ever build one.  It is a 28″x22″ mixed-media drawing on Bristol Board and is professionally photographed.  Having said that, there is about a dozen ways I could like a 32 Ford.  A Classic for sure.

The image below is A/Altered drag racing car I did recently.  It is of an actual car being campaigned today under the name Reath Automotive.  Shown here pulling a wheelie at Famosa Drag Strip (North of Bakersfield, CA).  My client’s Great Uncle is one of the three owners – Don Ratican (Ratican, Jackson and Stearns).  It is a 36″x24″ mixed-media on Bristol Board and professionally photographed. Note: The client bought a die cast model ($170) of this car, which I used as my model.  I have a Giclee Print framed for my collection.

This is a 1957 Ford Thunderbird – black with a removable white hardtop. The Frame is 28″x22″ and this image was taken by a professional photographer. 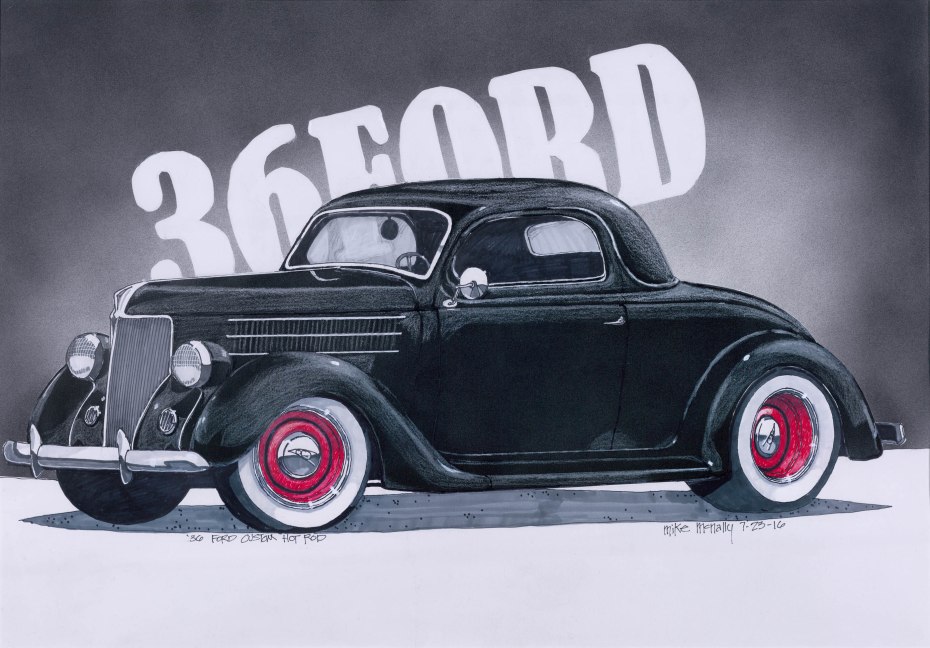 This drawing is of a 1936 Ford, 2-Dr. Coupe in a “Restomod” or customized version if I were to build a popular and “classic” ’36.  This is a professionally photographed image of a framed 28″x22″. 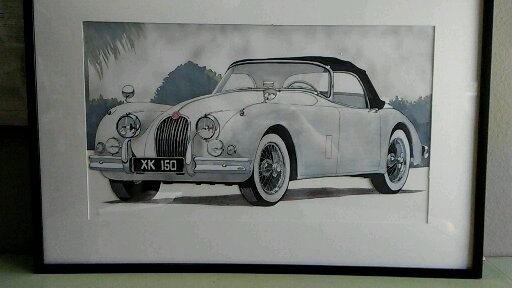 About 2011, I bought a 1963 1/2 Ford Galaxie 500 XL from a farmers barn in Clovis, planning on re-creating my late 60’s-owned 525 HP 1963 1/2 Ford.  This was my concept drawing of what I was going to turn the oxidized pale blue, rust-free car into.  Time and money made me sell it.  Interestingly, it was bought the Goodguys Car Club, restored at Legens Hot Rods in Martin, TN and given away in mid July 2017 to a member in Vallejo, CA.

My favorite Ford Mustang from the manufacturer is a 1970 Boss 302 drawn here in the most popular yellow livery and the “Rally” wheels.  I plan to draw a black Boss 429 later.  This cell phone image is 36″x24″.

One of my all time favorite racing cars has to be this 1966 Ford GT shown in the familiar Gulf livery colors.  This particular car was one of the top three cars to have won the Le Mans 24-Hr. race in 1966.  50 years later, Ford built it’s 3rd iteration of the GT.  This is a professionally photographed image and is 36″x24″. 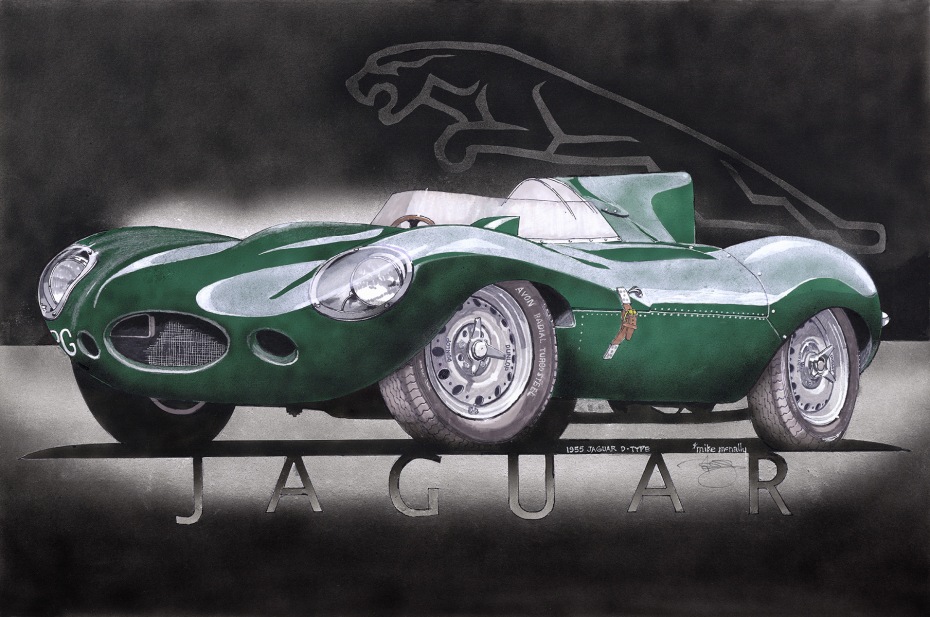 This is a ’56 Jaguar D-Type racer that was ran very successfully in the mid-fifties.  It was also the inspiration for the extremely popular Jaguar XKE that Enzo Ferrari himself proclaimed “Perhaps the best designed automobile ever.”.  I plan to draw one or two XKEs sometime later.  This is a professionally photographed 36″x24″ image. 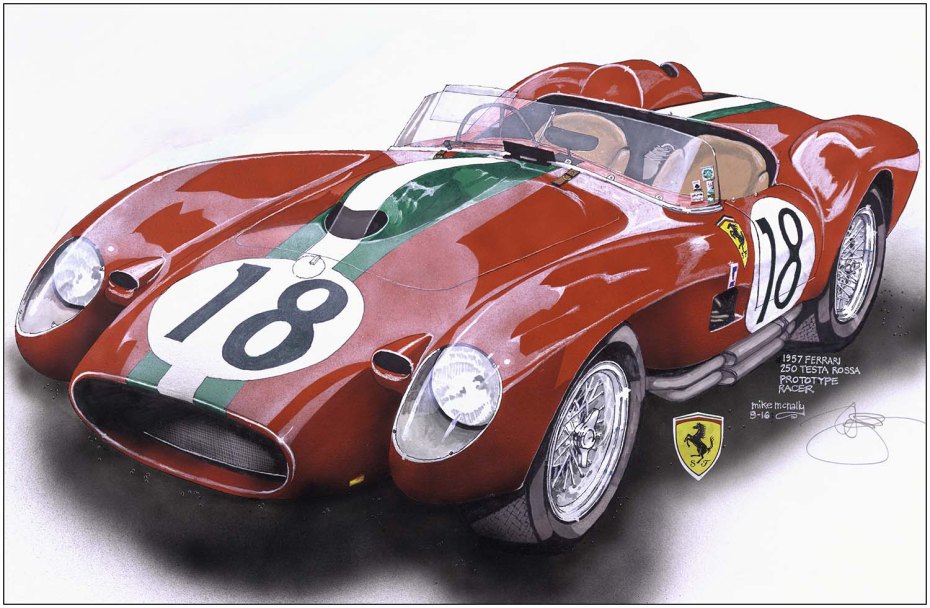 This 36″x24″ drawing is of a 1957 Ferrari 250 Testa Rossa Prototype Racer.  Likely one of Ferrari’s most iconic designs.  This image was professionally photographed.

If I were to make a “Woodie” for myself, it would likely be like the one I drew of a 1940 Ford in this “restomod” configuration.  This image was also professionally photographed and is 28″x22″.

This professionally photographed image is of a drawing I made of Fuel Altered Dragster.  This drag racing car was very popular in the 60’s and 70’s, but is no longer a type of category today.  However, they old ones and new versions can be seen running at “nostalgia” drags across the country as they were very popular.  In the old days, the engines were in the range of 1500-2000 HP, which made for a lot of exhaust noise and visual frenzy.  The AA means it is powered by nitro methane fuel.  This version I created of no particular actual car is a AA/FA.  The actual drawing is 36″ square and was finished on 6-28-17.

This is a 1960 “Birdcage” Maserati racer.  It was a very successful car of the early 60’s.  So named for the bird cage looking framework under the stylish sheet metal.  The original is 36″x 24″ and this image was professionally photographed.  Thanks to the intricacy of the wire wheels that were prominent this particular multi-media image took quite a few hours more than the average auto drawing.  Look closely…there really is some color in this drawing.  I chose the car’s number on the age I turned the month I drew the car.

THANK YOU FOR VISITING MY WEBSITE AND AUTOMOTIVE ART WORK.